This cannot be my life.  I mean really, how did I end up with an opportunity to travel through Thailand for 16 days with 7 of my closest friends… and make money at the same time?  If this is a dream ,I hope I never wake up.  This is the Bangkok project, three days packed full of the good, the bad and the ugly of what is Bangkok.

We started the day out with a 10min walk to the subway, 30mins on the subway and 4 hours on a luxury bus..and thats just to get to the Incheon International Airport in South Korea.  Just getting to the airport was a chore.  We would then spend the next hour navigating our way through the beast of an airport, just to get to our terminal. Needless to say, before our flight even took off I was all traveled out for the day.

The next six hours we flew with JinAir, which I highly suggest!  I mean what better way to start your trip to Thailand then with a plane full of Koreans ready to party and the stewardess bumping some tropical house music. Being the inner fatty that I am, I was even more pleased when we were served our food right away. Tropical music.  Check. Immediate food service. Check …Entertainment?  Would a group of older Korean couples getting drunk 1 hr into the flight safice? The answer is yes, yes it would.  It was some good ole reality TV drama as we watched all the old Korean men get wasted on the plane and disobey the flight attendants.

Upon arrival we quickly got a lesson in the art of conning people.  Nothing says fresh meat like 3 tired westerners stepping off a plane. My suggestion to anyone..see if you can get an arranged pick up with your hostel/hotel.  Like the smart travelers we tried to be, we read up on all the hilarious scams that some Thai people will pull on you but realized quickly that some are unavoidable.  You will get scammed at one point on your trip, so no need to stress. More often then not it will be pennies to you, but a days wages to them.

Lucky us… it was our first taxi into the city.  He made us pay for all the toll booths and tried to set a price with us but we insisted ‘METER, METER’!  I have learned that some countries you want to bargain your fair, but in Thailand… always ask for the meter!  We stayed at the CheQuinn hostel (highly suggest it!)  The hostel was very nice and clean and is fairly close to most attractions in Bangkok.  Only downside…. it’s near the red light district of Bangkok.  AKA the Old Nasty White Guy Prostitution pick up area.

Once settled we decided the most important thing was to get some famous Pad Thai and a Chang beer.  While eating we were enjoying watching the night life unfold in front of us.  Something that is pretty different from Korea.  The most disturbing was the amount of Western men purchasing young Thai women or (unknowing to the men) young Thai ladyboys.  This is when I realized we were near the red light district of Bangkok.  I am a feminist and seeing this for the first time really throw me for a loop.  Whether it is my place or not, it was very hard for me to hold my tongue as these low life men hustled women around like property.  I knew Thailand was well known for this but to see these animals out shopping for girls made me sick to my stomach.  Like I said, whether it was right of me or not, I made a few, loudly spoken comments to my friends about how disgusting I thought these men are.

However, I learned that when faced with these ‘men’ to keep my mouth shut (for my own safety), and if you think the woman is working against her will, there are helpful organizations out there. One of my favorites is, Walk Free.  The ‘men’ are animals and yelling at an animal that doesn’t respect women will only end in backlash on you.

So for my first night in Bangkok I was scammed and faced more culture shock then I was mentally prepared for. I did not sleep well that night to say the least. 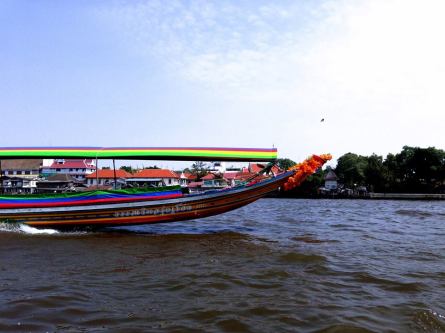 My boyfriend, Fiona and I had all day to waste before the rest of our crew arrived that night.  So we hopped on the skyway and took a traditional long tail boat to Wat Pho (the first of many Buddhist temples) to see the famous reclining Buddha.  We really took our time roaming around this temple and is grounds, this way we could absorb every detail they put into their statues, paintings and idols used for worship.

One thing to note, make sure you always have your eyes on your bags/purses in these temples, it is a hotspot for pick-pocketers and scam artists.  Also make sure you bring a jacket and something to cover your legs and shoulders to enter. It is a respect thing, even if you are not Buddhist it is important to not show skin when entering their sacred places.

After the temple we decided to walk around with the sole intention of getting lost. A few blocks into some Thai street markets = mission accomplished.  We walked for hours around the street markets and ended up in a Middle Eastern market.  The market was beyond crowded and so rich with what makes Middle Eastern culture beautiful.  I highly suggest getting lost in the markets of Thailand, you will be amazed at the small discoveries you will find! 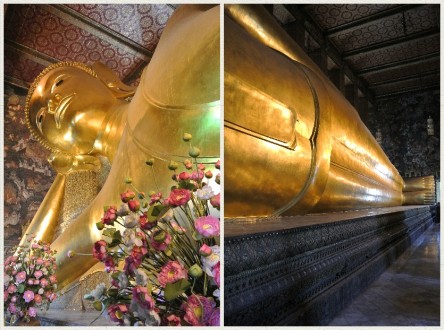 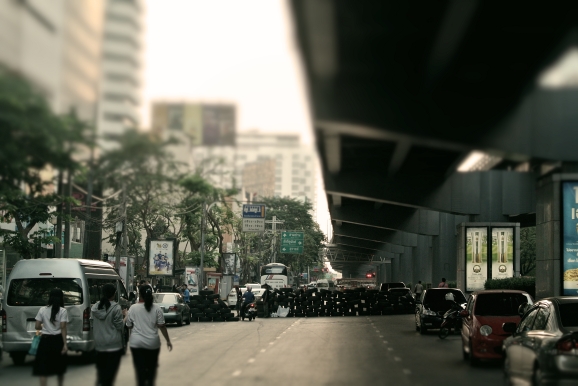 Our next stop, and probably not the brightest, was the blocked streets of the “Shutdown Bangkok” protests.   Thailand right now is under political unrest with its people lobbing to overthrow the Prime Minister and  trying to do so in a peaceful manner.  They blocked off parts of the city with one mission in mind, “Shutdown Bangkok” before the elections on Feb 2nd.  Walking through the newly set up street market made by supporters of the cause I couldn’t help but feel inspired by these people.  They spent all day here, peacefully fighting for their freedom and a better leader.  However, with political unrest always comes violence, so we kept our distance from the major protest areas, paid our respect and left before sundown.  Later on we found out that one of the major protest sites was bombed twice leaving 9 people dead and 29 injured.

That night the rest of our crew arrived and and we took them out for a welcome beer.

Waking up in a room crammed with you travel bestie isn’t a bad away to start the day!   Sonny, Joe, Emma, Shasho, Kevin, Karolyn, Fiona and I all woke excited to start our first/last day in Bangkok as a group.  Up first, the Wat Arun temple. The architecture that went into to this beautiful temple hundreds of years ago is simply stunning.  There is so much color, so much detail and of course…SO MUCH GOLD!   This beautiful temple can be seen perfectly from the Chao Phraya River (one of the dirtiest rivers in the world) or as we like to call it, Poo River. –It is not unusual to witness a few seagulls standing on mini islands of trash in the middle of this brown river.

After spending a few hours wondering around this temple we ventured across the river to the Grand Palace.  Upon arrival it was decided a few pictures outside would suffice. It is 500Bh to get in and none of us wanted to spend the money.  So we snapped some pics outside and left to check out the local markets.  I love all the markets in Asia each one is so unique and the ones in Bangkok felt like they went on forever!

Food here is crazy good, and the best part is how cheap it is! Just ask my buddy Sonny, being that he is Lao-American he literally couldn’t hold himself back from every… I mean EVERY street vender we come across. And like little ducklings, we were usually following right behind him, sampling our way through the markets. There is literally countless kinds of treats/snacks and dishes.  I don’t remember all the names, but I do remember loving them all….a little to much. But hey, calories don’t count when your on vacation.

When traveling in Bangkok you have to live off of the street food, it is just as good as the restaurants and it is so cheap. Getting a big box of mango sticky rice for 150Bh or $3.5, it just doesn’t get better then that! From what I do remember, the must haves are: any and all fruit you see and the fruit smoothies/ Tom Yum Kung (Thai classic)/ Massamum curry/ Mango Sticky Rice with coconut syrup/ Pad Thai (duh)…..really anything with curry or that is authentic Thai food is going to be amazing.  So go nuts and eat it all, you will never be disappointed!

Shopping… our other guilty pleasure. The must have: Thai pants.  This is the staple of souvenirs to get. I am a sweatpants connoisseur and these pants have made my life complete. Clothing here are so cheap, and if it is not cheap enough for you,  let the  bargaining begin!  We were always able to knock off about 100Bh on everything we bargained for.  It will be impossible to leave this country without an abundance of pants, shoes and other awesome trinkets.

The Grand Palace with our Thai pants

Back to the markets…..my boyfriend and I  were so easily lured into the windy roads and hidden allies that Bangkok has., that we eventually ran into our friends again.  Apparently we had been lost for a while. Oops. I once was lost, but a few crazy turned in an alley later, I was found.

Exhausted from a sensory overload of a day a quite evening at a small restaurant near our hostel for drinks and dessert was just what we needed.  (Dinner, of course was consumed on the streets) While relaxing and spewing down some fresh fruit ice cream we soon realized that we have two routes to take for our trip.  Live for the night or dive deep into the culture around us. Still filled with wonder from the day’s adventures we decided a life of partying can happen anywhere, but how often do you get to see a lifestyle, a culture, a faith so different from your own?  We spend the next 13 days waking up early (7:30-8am) and crashing at midnight.

So Bangkok.  I never saw your wild side, I never saw your infamous Ping-Pong show, and I can say I regret it.  My friends and I saw the best of you and I wouldn’t change a thing.   However, 3 days of concrete and I was itching for the ocean. It was time for us to head to our next destination, Koh Samui.