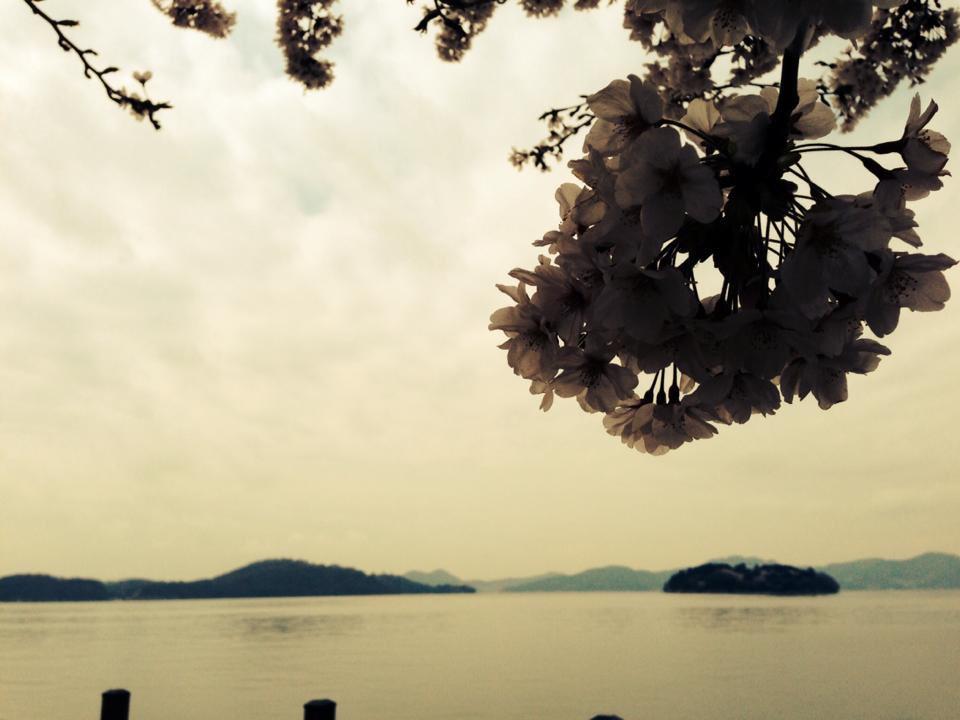 This past weekend had me running around both metaphorically and literally. Weekend Itinerary: Jazz Club, Jinhea Cherry Blossom Festival, Sonny’s Birthday and the Daegu Marathon (10k), all in just two days.

Friday night our good friends Jade and Oliver stayed with us.  One great thing about having Kevin’s apartment 10 seconds away from mine?  Guests get a whole (tiny) apartment to themselves when they visit. 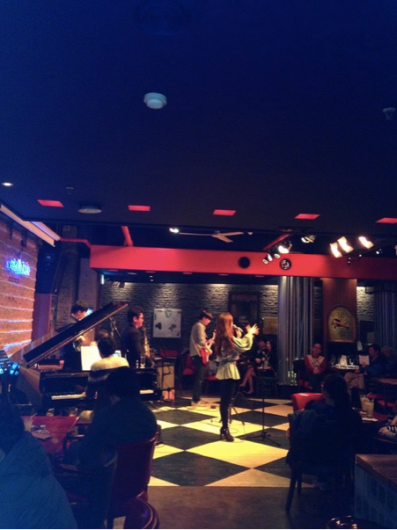 I have been wanting to change up the night life scene and see what else Daegu has to offer once the sun sets… that is when we found this gem, Old Blue.  Although it is still downtown, it is an amazing Jazz Club in Korea.  In fact, they have been open since 1988!  To Americans its kinda funny how local businesses advertise that they are a really old business, when they started in the 80s.  We’re use to seeing: ‘Established in 1930… Established in 1907’… ect.  However, since this country basically started from scratch (due to the messy Korean war in the 50s) and how fast small business come and go, celebrating open business for over 20+ years is a huge accomplishment!

When we arrived we were blown away but the classy and elegant atmosphere, as well as the beautiful cocktail waitress that seated us.  But we figured, this is a Korean Jazz club, it can’t be like the amazing artists we have back home, or in England?  Wrong.  Right as we were seated a live band starts to play and our mouths hit the floor.  Between the face melting base guitarist, the seductive saxophone player and a phenomenal pianist, all we could do was look at each other in astonishment.  I am sorry Korea, I was wrong; you do know your Jazz.  These guys did an amazing job, then the vocalist come on.  She was beautiful (typical, most Korean women are) and her voice sent me to the 1950s with Ella Fitzgerald.  Best of all, all her songs were in English! 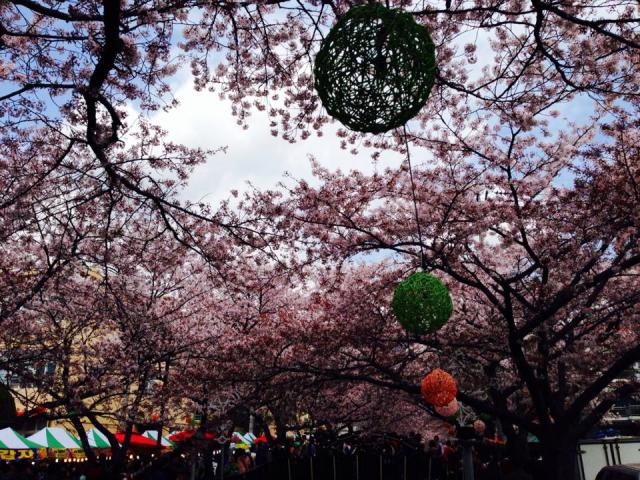 Our Saturday started before the sun was even up.  Kevin and I were late on booking bus tickets with the other waygookers…so our co-teachers booked whatever they could find.  Little did we know we were on a special bus tour for Koreans only around the city of Jinhea.  The Jinhea Cherry Blossom Festival is the flower festival of all flower festivals in the spring for Korean (or so we are told).  Spring in Korea is littered with gorgeous Cherry Blossom trees.  And the city of Jinhea is known for having the most and the best blossoms in Korea.  They hold festivals throughout the weekends in the spring and I believe it is a must see come spring time. 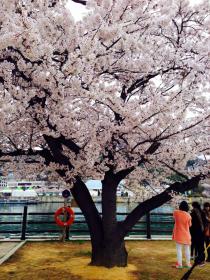 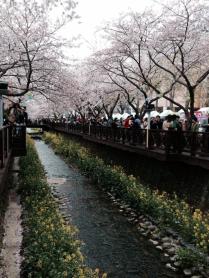 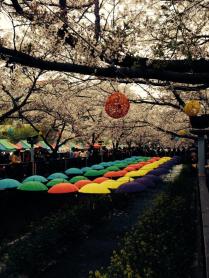 Our bus tour took us first to a Navy base where we got to check out some retired Korean ships used today and ones used wayyy back when….were talking old wooden ship style.  I haven’t a clue of when this ship was build because our tour was all in Korean. But it was beautifully crafted. 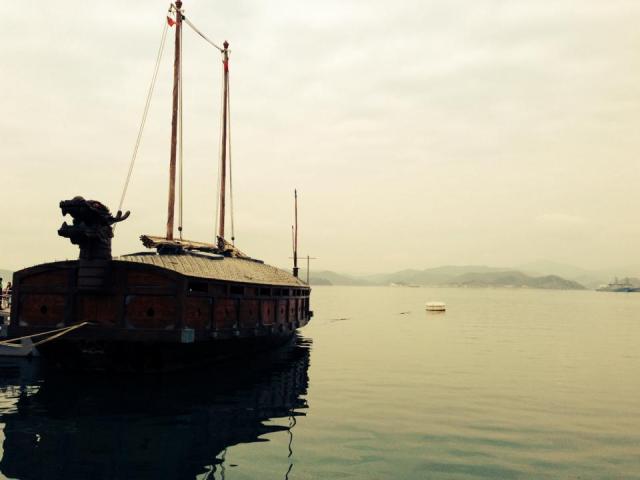 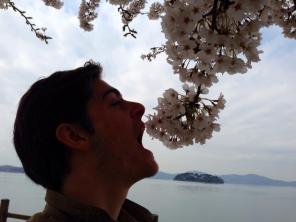 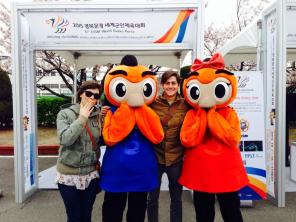 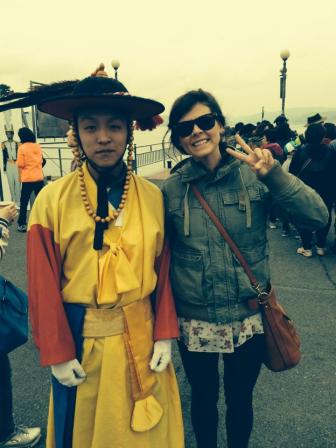 Next up, the street festival = About a mile or so of Cherry Blossom trees and a little creek running through the city. And, like any festival, it was packed with street food and Korean venders.  This festival felt a lot like the State Fair in some regard. A whole lot of fried food and everything was on a stick… even the selfies being taken were one a stick. Actually, after a while Kevin and I realized that this festival needed a new slogan… maybe something like “Cherry Blossom Festival, Selfie Paradise”. The amount of selfies that were being taken drove me nuts!  I love to photobomb Korean selfies but I had to calm down. I felt like I was Steve Butabi (Night at the Roxberry), overwhelmed with “hottie-overload” while walking into the Roxberry…1..2..3 Photobomb….1..2..3 Photobomb!  There was just too many opportunities and too little time. 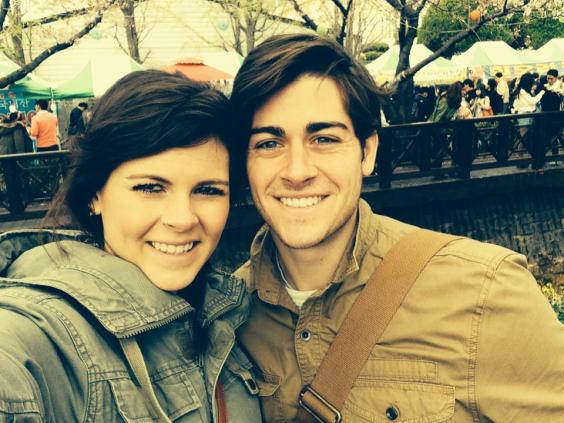 We hopped on the band wagon.

Two hours of stuffing face and taking some tree pics it was time to move on to our next part of the tour with our little Korean Tour Guide.  For the last stop of the day they took us to the train station where these trees lined the entire railway.  It was pretty, I’ll give them that, but the amount of people on the train tracks taking picture ruined the beauty of the blossoms and the tracks.  Kevin and I were not amused. It was selfie overload again, only this time I was stuffed with fried stick food and to lazy to move.  So we just found a good seat and did some people watching for a bit. Row upon row of couple after couple doing the same exact poses as the couple in front of them on the tracks was the highlight of this stop.  There was no use in taking our own photos because it was too crowded and you couldn’t even get any nature looking picture without 30 Koreans crammed into the shot. 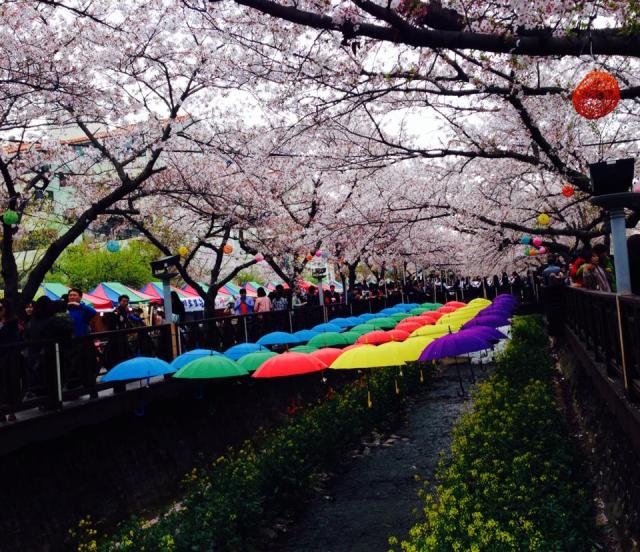 Overall I enjoyed the Cherry Blossom Festival in Jinhae.  It was a fun celebration of spring and there were a lot of beautiful trees to take in, however (like any festival) it was very crowded. 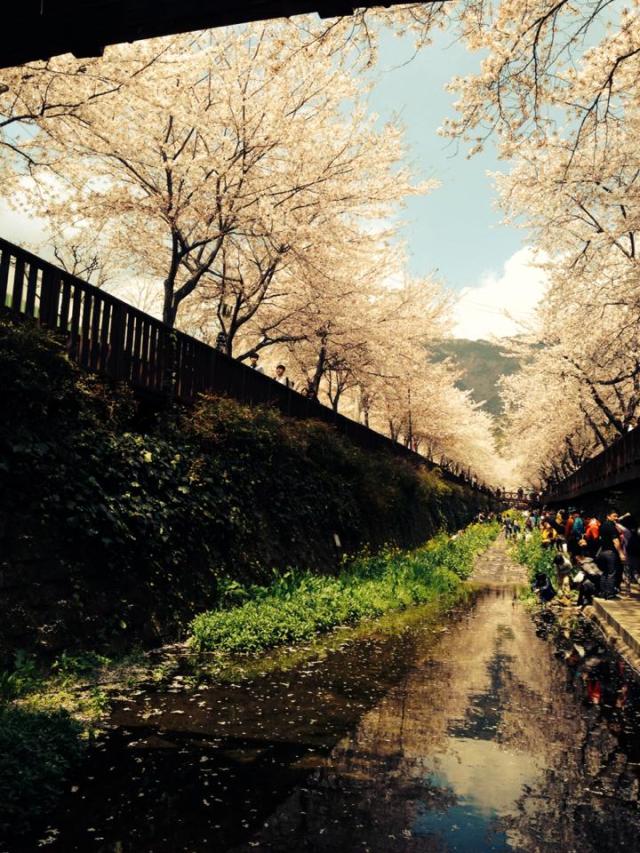 My ladies getting into the Korean Spring Time spirit with some lovely bears. 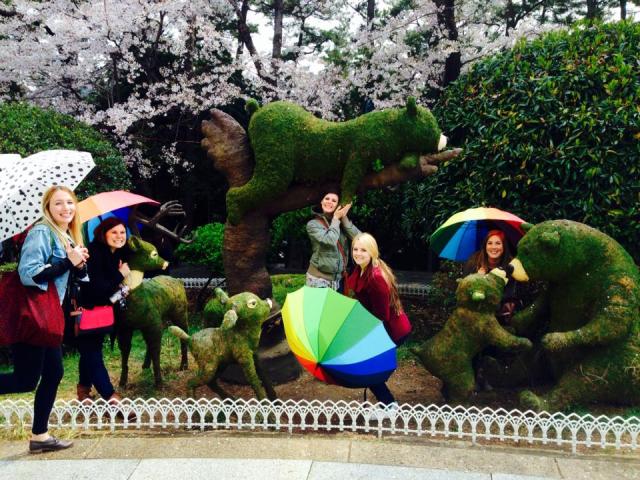 That night we rushed home, pulled our party pants on and helped Sonny celebrate his big Birthday in Korea! 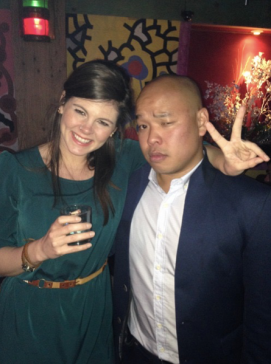 The next morning was rough.. we were up with the sun…again.  It was cold, we were tired, but I will never forget this day.  Today was the day that Kevin and I would settle a 6 year debate. There would be no excuses, no cheats, and no complaints.  The battle of ‘Who is faster?’ would end today. 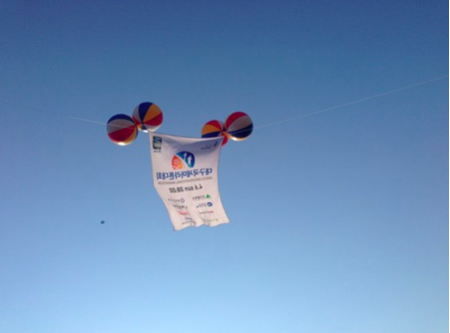 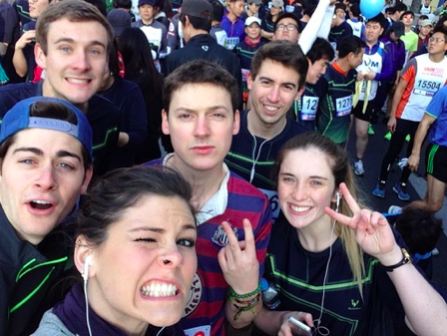 And let me tell you victory looks damn good on me.  You know the story of the Tortoise and the Hare?  Enough said.  Kevin had been in front by a long shot the entire 10k, until I saw him in the last half mile.  .  Picture this:  In a crowd of Koreans casually enjoying their run to the finish line some crazed white girl zooms past in a dead on sprint to the finish.  I caught Kevin just 30ft from the finish line.  With one sweet word of “Sucker” ringing in Kevin’s ear, I crossed the finish line. First.  A victory is a victory Kevin, and no. I will never let this down! 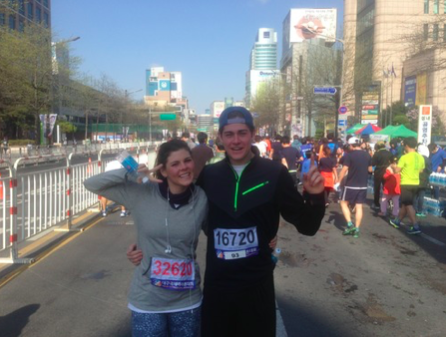 *Please notice how sneaky this hare is. He told me “Let’s hold up the Korean Peace sign for the photo!”… so I do and he holds up a one. Clever boy, but….