If there’s anything that Korean’s love more, its a good celebration. Whether it is family filled fun or a good excuse to bust out the soju, either way, Koreans will gather and celebrate.  They have parties or festivals for everything under the sun. Love chicken and beer? Korea has a festival just for that.  Cherry Blossom trees are in bloom… have a festival.  Your town has awesome mud…have a festival. There is even festivals dedicated to bathing and washing hair to get rid of bad luck, Yudu Festival.  However, this post is about one of my favorites, the Andong Mask Festival.

Andong, South Korea is a fairly small town in Gyeongsanbuk-do providence. This beautiful town is known for many things in Korea. It is a center of cultural and folk attractions, delicious foods, and their POWERFUL soju. *Warning: this soju is not for the faint hearted… upon consumption chest hair will sprout. This town is a great weekend get away for any expat looking to tap into traditional Korea. Be sure to make that weekend to Andong, your first choice in mid October to catch their famous Mask Festival.

After some awesome friends (Jade and Oliver) from Uiesong informed us Deagu kids about the Mask Festival, we were all on board. The festival is held once a year, the last two weeks of October.   It is a celebration to pay tribute to their ancestors through their traditional folk mask dances, like the Byeolsingut Talnori dance and the art of mask making.  The festival is held around the Hahoe Folk Village, near downtown Andong.

Traveling from Deagu we took a bus from the BukBu Bus Terminal an hour north to Andong.  Actually, if you can take a bus anywhere in Korea, do it! They may be slower then the KTX but you will ride in a Lazyboy the whole way!  Once we arrived in Andong we took another bus to Uiesong, an adorable garlic farming town close to Andong. There, we dropped off our bags at Joli’s (Jade and Oli) and did a little pre-gaming.

Once we arrived, the heavens opened up and dumped on us.  Between Jade and Oli there was not enough raincoats or hats for us all, so we resorted to magazines as umbrellas and whatever we could find to keep dry at the festival. A little rain was not going to stop us from all the amazing food and drinking festivities at the Mask Festival.  So onward we marched.

Soaked but hungry and excited to get our mask on, we arrived at the Hahoe Folk Village only to be pleasantly surprised that everything had been moved under tents.  This is where we started loosing people left and right.  Like kids at a circus, are eyes drove us apart as we all sought  after some of Andong famous foods and drinks.  If you ever get the chance to go, you must try their Jimdak (spicy chicken w. veggies/noodles), Heotjesabap, Andong’s bibimbap (rice dish with mixed spices and veggies) or the awesome Korean street food.  Try it all, LOVE IT ALL! 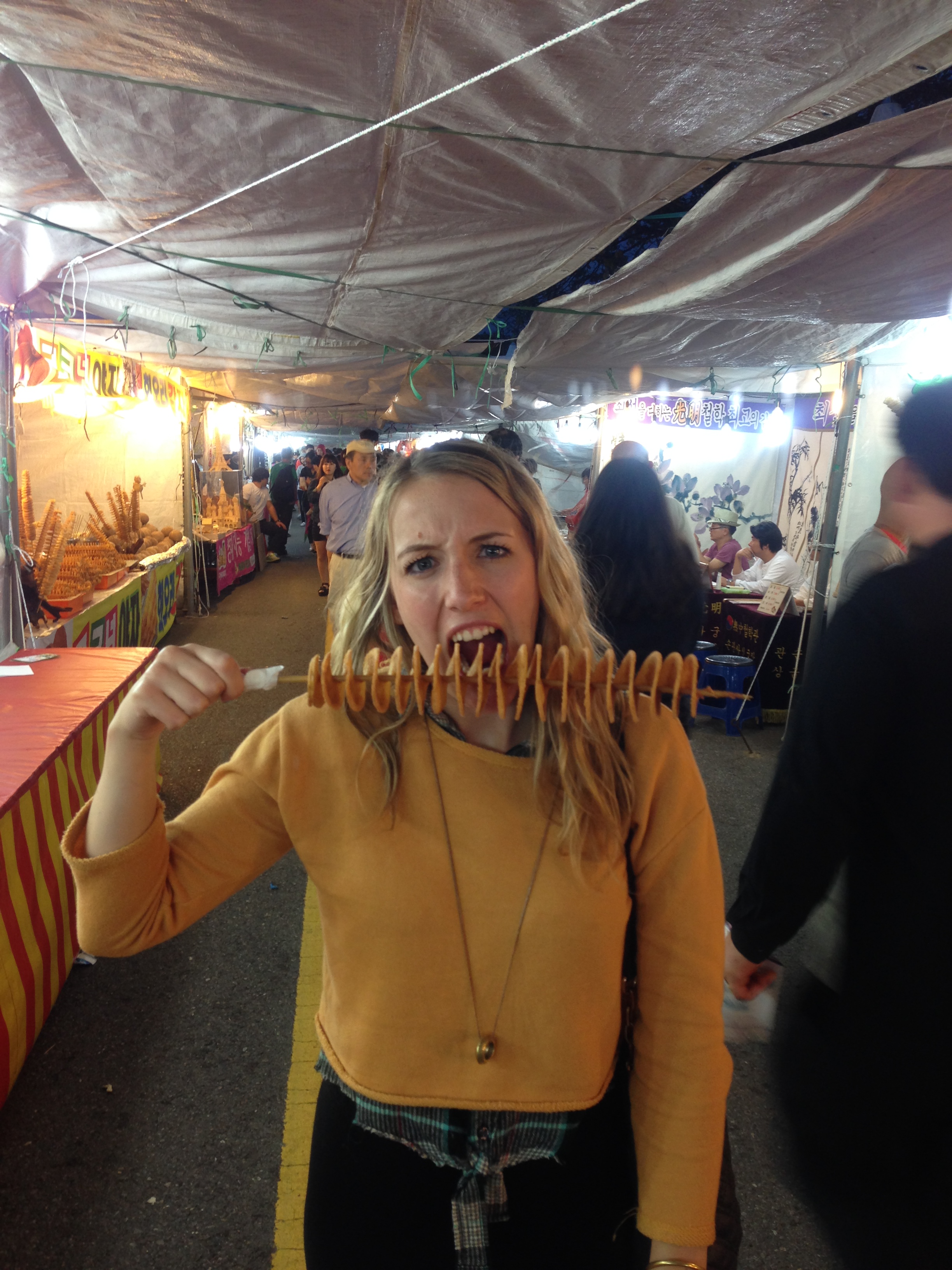 After sampling everything we could get our greedy foreign fingers on it was time to check out the many activities this festival has to offer.  There were multiple stages in the main square where you can watch traditional dances, such as the Byeolsingut Talnori dance. Or you can watch the local kids in masks perform their favorite KPOP numbers on the smaller stages!

This mask festival had it all for our large group to enjoy.  Some saw puppet shows, I didn’t….puppets scare me.  So if your like me there is many other things to entertain you and not have nightmares. There is mask making and art exhibits, dance lessons and (a Korean elderly favorite) weird polka concerts, mask folk dances, food and souvenir shopping.  My favorite was the Ttalnolyi Parade.

Fiona, Thomas and I wondered off to see what else there was at the festival. Little did we know our 15 minutes of fame was to come.  On the outskirts of the festival there was a tent with massive/creepy costumes.  We wondered over to check it out and watch people put them on.  The Korean gentleman working at the tent offered to have us try on a few and walk around for a bit. I was excited for two reasons, the costumes were ridiculous and they would keep us dry! 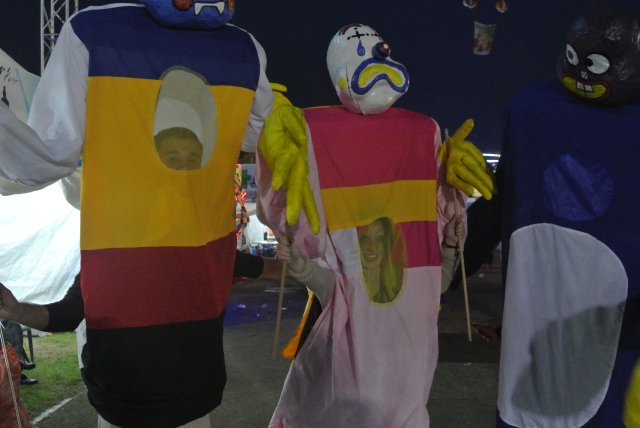 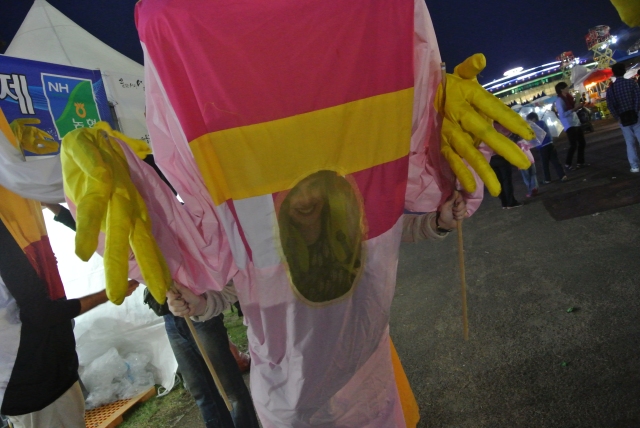 We were so excited!  The costumes were massive and Fiona and I struggled to stay balanced in them.  So we spend the next half hour wondering around scaring children at the festival.  Meanwhile, the rest of the group was walking around the whole festival looking for us.  Kevin, my boyfriend, was NOT happy with me.  But, like clueless children, we were having a blast running around dressed like a demented Teletubby. 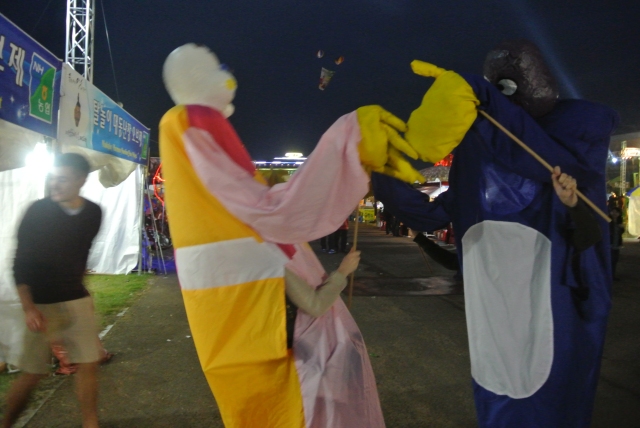 While wondering around and making total fools of ourselves in our new disguises two Korean staff workers at the festival saw us and started ushering us to a line.  The line was filled with other demented Teletubbies and dancers with masks so we thought our fun was over, until the parade started.  It was then that we realized that we were tonights entertainment!    Laughing to ourselves, we fantasized over our friends running around the festival looking for us so we could all watch the parade together… little did they know we were in it.

It was one of those moments in life where you just stop and appreciate how ridiculous it is.  I live in South Korea, it’s pouring rain, I am with some amazing people I have met from all over the world at a mask festival…. and now I’m walking in a parade dressed like the Hamburglar from Burger King.  Could life get any better? Of course it can, but I was enjoying my masked 15 minutes of fame while it lasted. 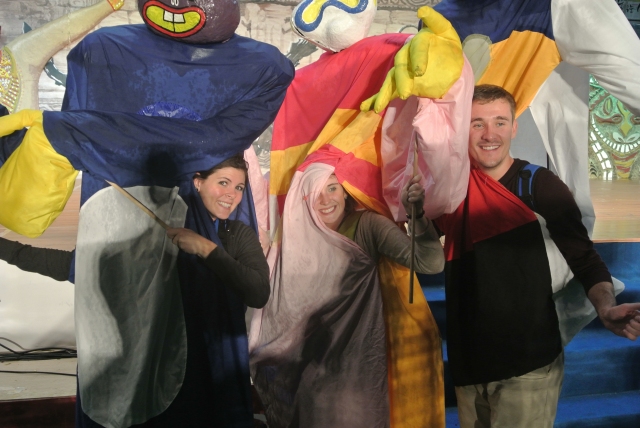 After the parade Fiona, Thomas and I finally found our group. However, since I was still in my Korean folk mask costume I decided to be the handsy Hamburglar and put some moves on Kevin.  My plan was to move in on him and play a little game of grab ass, turns out he recognized me… I have no clue how, and the fun was over.

So the clock struck 10, and it was time for Fi, Tom and I to return our celebrity status costumes back to the tent.  It was sad, but one can not consume Makgeolli (Korean rice wine) in that get-up!  We were off to the drinking tents to join the rest of the crew and have a few with the local adjusis (old Korean dudes). 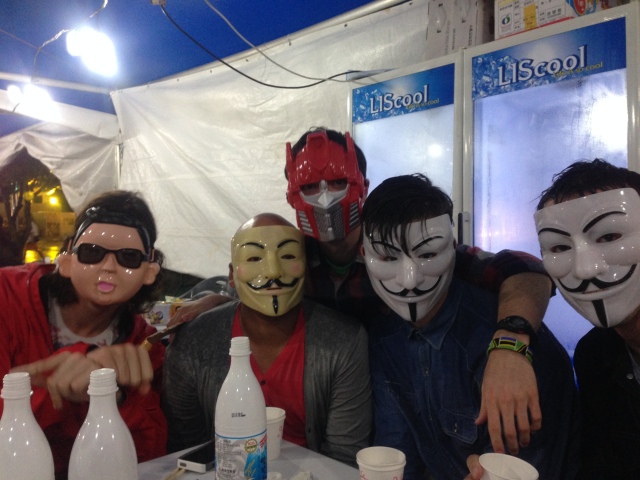 My chingus in the Makgeolli tents.

Even in the rain this festival, like many in Korea, was a real hoot-in-a-half!  So here is some info on how to get there and what to expect.

For more information about this fun filled festival please see the link below.  I didn’t make it to the dance theater, so I cannot speak for it.  But, there was plenty of dances at the main site to get the just. Enjoy!